‘DESERT FLOWERS’ is out today in the United States, UK, Australia and Canada. So today is the day when I can finally open the door to the house where my new novel takes place. A house lost in the remote landscape of the Baja California Desert, Mexico, where an American family has decided to build its home. Here, Elmer and Rose take care of their five daughters, all of them with flower names: Edelweiss, Iris, Melissa, Daisy and Dahlia. I’m thrilled to be able to invite you into their home, to open the screen door on the porch to anyone who wants to discover what’s really hidden among these cactuses.

I invite the reader to come into the kitchen, where Rose might be making breakfast, finding herself absorbed, like she is every morning as she looks out of the window, in the desert turned by the rising sun into a palette of a thousand shades of watercolor. To meet Rose is to meet a woman who loves her five daughters above all else, a devoted mother capable of making the greatest of sacrifices to protect her girls. By all means enjoy her conversation, just don’t ask too much about her past, especially about the time before moving to the house among the cactuses. And best not mention the wooden cross driven into the earth out back, the one with Edelweiss’s name engraved on the crosspiece. 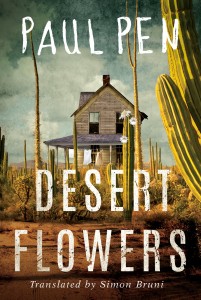 When Elmer comes in through the kitchen door, freshly shaved, wearing the coveralls from the gas station where he works, a handshake will be greeting enough. He’s sparing with words and looks at any stranger invading his territory with suspicion, so tread carefully whenever he’s close by. Elmer’s arrival would be a good moment to leave the kitchen and take a look around the living room. There, hanging from the wall, is the guitar that Edelweiss played. And the turntable that plays the music to which the family dance together. Among the Flowers, by Bob Davis, is one of their favorite songs.

It’s likely that a frenzy of footsteps will break out at any moment upstairs. It’s the twins, Daisy and Dahlia, who’ll come down in their little red pajamas, hungry, in search of cereal and kisses from Mommy. They’re identical, aren’t they? Sometimes it’s as if they were the same girl, especially when they both talk at the same time. A good topic of conversation with them, to keep them happy, would be to ask them about the pictures they make with colored beads. One thing they don’t like talking about is how they have to take turns hiding whenever their teacher Socorro comes.

After meeting the twins, why not head up to the bedrooms? Iris will be in front of her dressing table mirror, brushing her hair. At the same time, she’s probably reading a Jane Austen book, or maybe the script to A Streetcar Named Desire, which she loves. It’s easy to talk to her about anything, she has a large vocabulary and an excessive interest in meeting a boy from outside, and so you never know how an encounter with her will end. She is already a beautiful woman, full of life, as lovely as the flower from which she receives her name.

Two doors further on is Melissa’s bedroom. Here you should take a look at the wall where she hangs the best drawings she’s done of the family. They sum up perfectly the happiness that reigns in their home. There are also several portraits of Edelweiss, now the only way to see her face. Melissa especially likes a picture she drew of her eldest sister one summer, in which she has an armful of vegetables dug from the ground. Melissa herself might be in the room, talking to her stones with eyes. Don’t be afraid to ask her about them, she likes introducing people to the rocks that she’s brought to life and named after movie stars. Melissa’s a very special girl in a very difficult situation. Please treat her with care and understanding.

Finally, after seeing the house and meeting the family, you should go outside and enjoy the unique landscape, as beautiful and as mysterious as the flowers that come out on the cactuses at the beginning of summer. A few yards beyond the front porch stand three cactuses dressed in men’s clothes, like desert scarecrows. They are Needles, Pins and Thorns, great friends of Melissa’s. They only speak to her, so there’s no point trying to strike up a conversation with them. After all, they’re just cactuses. Right?

And now that you’re out here, listening to the sounds of the family living its everyday life inside the house, the best thing you can do is wait for nightfall to enjoy one of the loveliest landscapes that exists: the Baja California Desert at sundown. Don’t be frightened if you hear footsteps behind you. Pay no attention to the animal skull gleaming on the dirt in the moon’s silver light. And if you feel the hairs on your arms stand on end, you’re better off thinking it’s the sudden change in temperature as the sun disappears over the horizon. You’d also do well to persuade yourself that the figure in white cloth floating among the rocks is Melissa—she often goes out at night to talk to her cactuses—and that the hand approaching your neck from behind must be Iris’s. Has the porch light come on by itself? No, it must be Elmer and Rose, who don’t really like receiving visitors at all.

Maybe I forgot to warn you that, though you might know when you enter the house among the cactuses, you never know when you’ll leave. If you ever do. And now it’s too late.

Check the book on Goodreads HERE